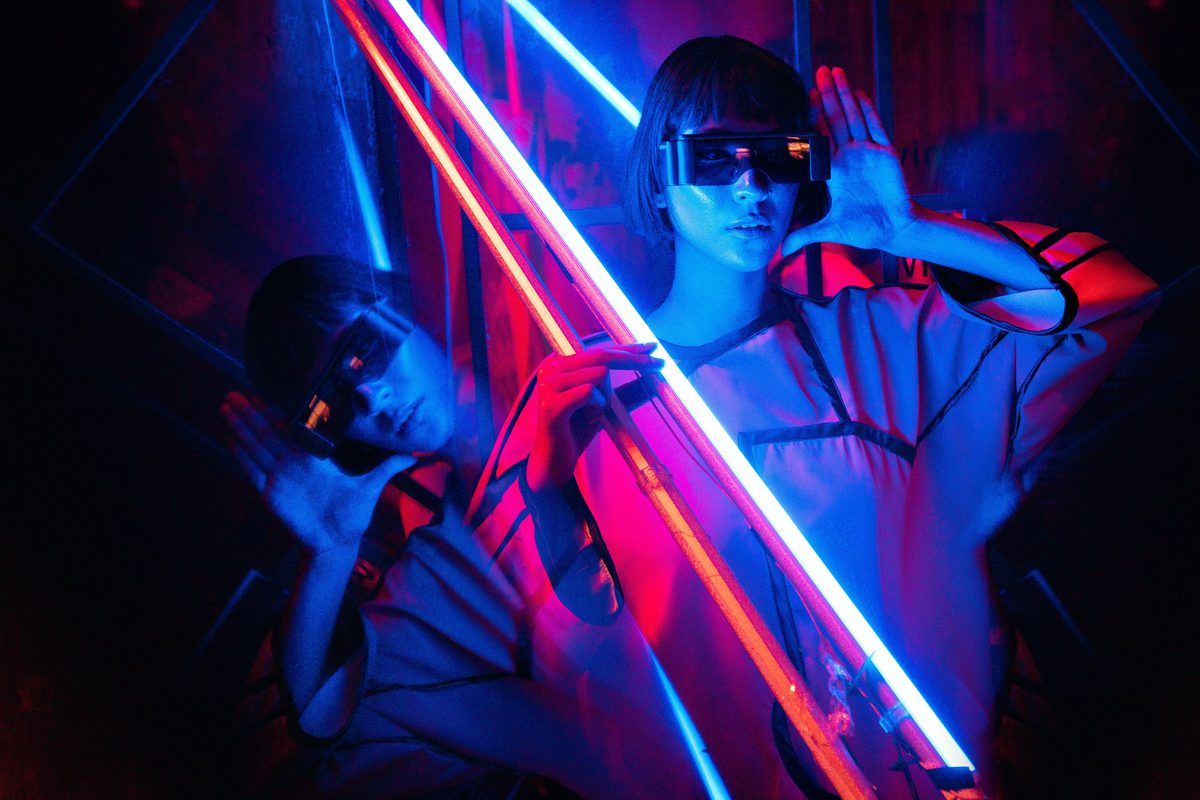 The term cyberpunk may be confusing for those unfamiliar with sci-fi, so we will explain cyberpunk definition and what this cultural phenomenon consists of in our article. Blade Runner and Neuromancer represented a cinematic and literary confluence that generated the filmological and written birth of the movement. Visually, all cyberpunk that followed was influenced by Blade Runner; similarly, all cyberpunk literature has been influenced by Neuromancer. Cyberpunk has never been simply a literary genre. Let’s take a closer look at this depiction of the future.

Are you looking for the cyberpunk definition?

By analyzing the term cyberpunk, we can get a basic understanding of it. Cyber refers to technology and is most often associated with cyberspace. However, the cyberpunk definition may also refer to other technologies like biotechnology and nanotechnology.

The two genres are not interchangeable, but they have a lot of similarities. The term “Punk” refers to cyberpunk people and their attitudes. Cyberpunk characters tend to be outsiders, anti-heroes, outcasts, criminals, visionaries, dissidents, and misfits. All of these groups share a common feature: their rebellious nature.

According to Meriam-Webster, cyberpunk definition is “science fiction dealing with future urban societies dominated by computer technology” or an “opportunistic computer hacker.”

To sum up, cyberpunk definition is a science-fiction subgenre in which antiheroes are trapped in a dehumanized, high-tech future. But how did it turn out?

The word “cyberpunk” was first used in a short story by author Bruce Bethke, who coined the term in 1982. He came up with the term after studying cybernetics, which studies replacing human activities with computerized ones, punk, cacophonous music, and nihilistic attitude that emerged in the 1970s and 1980s among young people. Science fiction editor Gardner Dozois is responsible for popularizing the term.

In science fiction circles, “cyberpunk” is used to describe antiheroes trapped in a dehumanizing high-tech future. Its origins date back to the 1940s and ’50s, but it took years to mature. Bruce Bethke coined the term “cyberpunk,” which he used in his 1980 novel The Cybernetic Complexity of Love and Hate. He coined the phrase by combining “cybernetics,” which studies replacing human functions with computerized ones, and “punk,” raucous music, and nihilistic sensibility that became a youth culture in the 1970s and ’80s. However, William Gibson’s 1984 novel Neuromancer truly catapulted “cyberpunk” into popular usage.

The cyberpunk movement has affected literature and many media tools. Film, television, anime, manga, comics, games, and music are all affected by cyberpunk.

Cyberpunk movies, of course, stand out in this regard. Here are some of them:

Cyberpunk films have the potential to meld several subgenres into one exciting experience. Just because a film takes place in a dystopian future doesn’t mean it can’t be funny, thrilling, and provocative at the same time. Many of the greatest cyberpunk movies are entertaining and have more substantial themes. Paul Verhoeven is one of the few directors who can blend popular entertainment with sophisticated social commentary. There’s no better way to understand Paul Verhoeven than through his 1987 masterpiece “Robocop.”

It’s not only one of the most violent action movies of the 1980s, but it’s also a clever commentary on corporate culture and neoliberal politics, reflecting elements of the Reagan era. In “Robocop,” which is set in a dystopian future where cities are plagued with crime, Detroit police officer Alex Murphy (Peter Weller) attempts to rid the streets of criminals. Still, the cops are overwhelmed by deadly criminal gangs that run rampant throughout the city. Murphy is shot down and tortured by the crime boss Clarence Boddicker (Kurtwood Smith). He succumbs to his injuries, but an ambitious young executive at the megacorporation Omni Consumer Products has a plan to bring him back to life.

Even though cyberpunk novels are set in the future, their influences may be much older. The Wachowski brothers took inspiration from ancient Greek theories of Plato with their cyberpunk classic “The Matrix.” According to Plato’s “Allegory of the Cave,” people did not question the nature of their reality; instead, they accepted whatever information was fed to them without trying any further. Humans were, in a sense, imprisoned in a cave-like situation. Instead, they viewed shadows on the walls rather than existing in the actual world. The Wachowskis expanded on this idea and translated it into a bleak vision of a future full of technology. A super-intelligent artificial consciousness network known as the Matrix has secretly enslaved most people’s minds throughout the world.

The Matrix is a computer network that simulates reality to keep people distracted. The majority of these individuals are unaware of it, but an ever-increasing technological adversary exploits them. A few courageous survivors have managed to rouse themselves. On the ship Nebuchadnezzar, the resistance leader Morpheus (Laurence Fishburne) commands a crew of freedom fighters as they flee from the machine world’s forces. He believes in a future savior known as “The One” who will preserve humanity. Neo is introduced to reality by Morpheus.

The cyberpunk genre frequently mashes together with noir tales, which makes sense. Classic noir films from the ’40s and ’60s focused on lonely private detectives who confronted mysteries in desolate, dark cities. As they unearth evidence, they encounter secrets that expose humanity’s worst. They may still feel alone even in a metropolis as big and sprawling as this one. Ridley Scott’s visionary science-fiction classic “Blade Runner” introduced the noir genre into the distant future. “Blade Runner” is based on Philip K. Dick’s short story “Do Androids Dream Of Electric Sheep?” and asks questions about technology and whether humans can create sentient artificial intelligence. It’s not the first sci-fi film to feature android characters, but in “Blade Runner,” the replicants begin to doubt their mortality.

Rick Deckard (Harrison Ford) is the eponymous “Blade Runner.” Blade runners are top-of-the-line private detectives who seek out and eliminate synthetic humans known as replicants after they have outlasted their intended lifespan. In 2019, “Blade Runner” follows Deckard on his hunt for a renegade group of replicants led by messianic Roy Batty (Rutger Hauer). Deckard is a bounty hunter dispatched by Tyrell (Brill), a tycoon who wants to cover up the existence of Rachael, another replicant (Sean Young). He travels with Rachael, a replica (Sean Young), with whom he gradually falls in love. The irony is that while he thinks himself to be human, Deckard learns about empathy only through interactions with replicants.

Cyberpunk style: How did the cyberpunk movement shape society?

Cyberpunk fiction has been the inspiration for numerous subcultures. The cyberdelic counter culture that emerged in the late 1980s and early 1990s was one. Cyberdelic, known as “cyberpunks,” attempted to merge the psychedelic art movement with cyberculture technology. Mark Frauenfelder, R. U. Sirius, and Timothy Leary were all early leaders in the movement. It quickly spread after its creation in 1965. The movement largely went out of existence following the dot-com bubble burst of 2000.

Cyberpunk is a subculture that emerged in the mid-1990s as a combination of cyberculture and gothic music. In addition, a unique cyberpunk fashion has emerged in recent years, rejecting raver and goth influences while drawing inspiration from urban street fashion, “post-apocalypse,” functional clothing, high tech sportswear, tactical uniform, and multifunctional clothing. This style is sometimes known as “tech wear,” “goth ninja,” or “tech ninja.”

The Kowloon Walled City in Hong Kong (demolished in 1994) is often regarded as the prototype cyberpunk/dystopian slum, owing to its poor living conditions and the city’s political, physical, and economic isolation which have attracted academics to study its creation.

While the cyberpunk movement has influenced many movies, it has also inspired different productions, as we mentioned. However, if we talk about cyberpunk, we should briefly touch on these three terms: biopunk, dieselpunk, and steampunk.

The term “biopunk” (a portmanteau of “biotechnology” or “biology” and “punk”) refers to a subgenre of science fiction that focuses on biotechnology. It is inspired by a cyberpunk rather than focusing on cyberware and information technology. It explores the consequences of biotechnology. Biosafety is the theme of biopunk. It’s built on cyberpunk themes such as bio-hackers, biotech megacorporations, and tyrannical government agencies that tamper with human DNA. Biopunk, which generally stays true to the dark tone of cyberpunk, examines the sinister side of genetic engineering and shows the negative aspects of biotechnology.

Dieselpunk is a retrofuturistic subgenre of science fiction that blends the aesthetics of diesel-powered technology from the interwar period to the 1950s with retro-futuristic elements and postmodern sensibilities. The term “dieselpunk” was coined in 2001 by game designer Lewis Pollak to describe his tabletop role-playing game Children of the Sun. It has subsequently been used to describe various visual art, music, film, fiction, and engineering.

Cyberpunk is now. Many of the things that were expected in cyberpunk are now a reality. Brain-controlled prosthetics, a standard of cyberpunk, have resulted from advancements in prosthetic technology and brain-computer interface. Corporations’ dominance of global politics and culture has created a climate ripe for subversion. The gap between rich and poor is growing, fueled by globalization and technological advancements. The cyberworld continuously merges with the physical world through items like the Internet of Things, social media, mobile technology, virtual reality, and augmented reality. Hackers have brought criminal organizations, firms, governments, and people to their knees. We’ve entered the cyberpunk era. Welcome to it.

Cyberpunk has evolved into a culture rather than a simple genre, thanks to its widespread adoption in other media. Cyberpunk films, television programs, comics, music, and artwork can be found in almost every corner of the earth. All you have to do is search. Fashion, building design, and philosophical thought have all been influenced by cyberpunk. The cyberpunk genre has grown in sophistication over the years, and it is no longer tied to a single vision. It will continue developing and gaining relevance as we move closer to the Cyberpunk Future. Artificial intelligence is the driver of the cyberpunk future. If you ask whether artificial intelligence is better than human intelligence, we already have the answer.