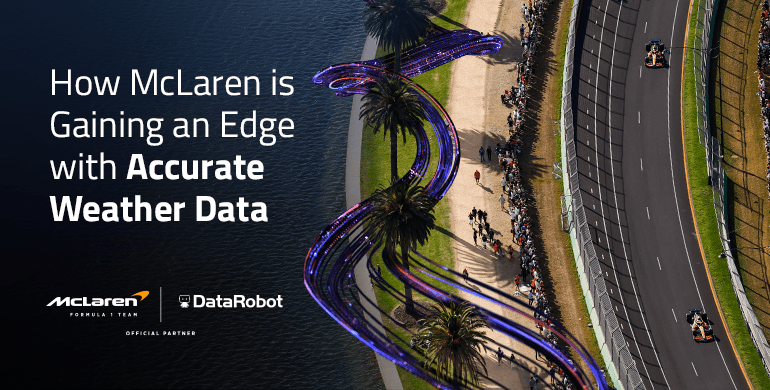 If you’ve ever driven through Texas or Florida during a rare Southern snowstorm, a few things quickly become cartoonishly obvious—your tyres matter, your driving matters, and your ability to navigate changing weather conditions really matters.

As the Formula 1 Miami Grand Prix culminates on May 8, 2022, it’s not likely to be snowing. The forecast calls for sunny skies and temperatures between 68℉ (20℃) and 77℉ (25℃). But each race team’s ability to accurately anticipate the slightest change in track or air temperatures could mean the difference between finishing without points and popping the champagne on the victory platform.

The key for Formula 1 teams is keeping their tyres in the right operating window to maximize performance.

To make laser-sharp predictions, McLaren’s Formula 1 drivers and team members use DataRobot automated time series capabilities to forecast air and track temperatures. The models are then ready to be deployed live via a StreamLit application.

Predicting the temperature on the track just a few minutes into the future allows the team to:

Why does this matter so much? Making the correct temperature predictions allows for aerodynamic cooling configurations to adjust the car’s temperature. With DataRobot time series capabilities and quick predictions, the actual values and predicted values are nearly identical.

How Can You Make Reliable Predictions with No Historical Data?

Way back in 1925, Carl Fisher—who built the Indianapolis Motor Speedway in 1909—was working on developing Miami Beach and turning the Miami area into the winter auto racing capital of the world. While the Daytona 500 has captured much of the racing headlines coming out of Florida, the Sunshine State will finally be the epicenter of the Formula 1 world this May.

While the F1 debut of the Miami International Autodrome will be exhilarating for Miami race fans, it poses a huge problem for race teams. Why? Because there’s no historical data to base predictions upon for the 3.36 mile (5.41 km) layout—one with 19 corners, three straights, the potential for three drag reduction system (DRS) zones, and an estimated top speed of almost 200 miles per hour (320kmh).

So, where will the race day data come from?

McLaren’s strategy team will need to quickly digest and analyze this information to understand the new course and its various idiosyncrasies.

I was lucky enough to speak with Randy Singh, Strategy and Sporting Director for McLaren Racing, and ask him questions about how weather data is used to make decisions around a Formula 1 Race. Here is what he was able to share:

How is weather data used on race day?

If the race is expected to be dry, then the main weather data used on race day are relating to temperatures (that influence cooling levels, tyre pressures, etc.) and wind (that influences the amount of downforce/drag the car has at various attitudes).

Are there long-term strategies being developed using predicted weather data?

We plan strategies for races some time in advance, and temperature forecasts are used to estimate how tyres may behave at upcoming races. So, this data feeds into the race strategy planning. We also have to make various design and aerodynamic decisions in advance (e.g., what rear wings should we make?) that are based off of various atmospheric data.

How does weather data accuracy affect potential outcomes during the race?

Not getting the cooling right can be disastrous and lead to a DNF. Conversely, getting it right means that you can run the tightest/most efficient bodywork package, thereby maximizing your pace.

Who usually analyzes this data?

How Can You Combine Marvels of Engineering with  Advanced Data and Split-Second Decision-Making?

I love working with McLaren because I have a passion for Formula 1. Why are so many data scientists and engineers passionate about the sport?

If you think about it, you have human prowess, which is just reaction time—the drivers train like pilots and perfect the training that they need to go through—and there is an acceleration between 4 and 6 Gs. The physicality is insane. Then you have these marvels of engineering, which are crazy fast. And then there’s the data that they collect, They have sensors everywhere. And I think it’s just with that combo, it’s literally the pinnacle of sports.

Also, whether it’s data scientists developing Continuous AI or McLaren operating in the intense, competitive environment of Formula 1, every decision requires an iteration loop. That’s why I’ve found Boyd’s Law of Iteration to be particularly helpful in prioritizing the type of iteration. According to Boyd, the speed of iteration is more important than the quality of iteration.

While Boyd’s famed OODA loop came out of his dog fighting days in the Korean War, it can also be very effective in the worlds of business, politics, personal development, and sports.

McLaren iterates through 14,000 parts between the beginning and the end of a race season. They’re all about Boyd’s law. It’s all about iterating as quickly as possible.

Whether it’s improving machine learning algorithms or shaving a nanosecond off a racing lap, iteration speed is everything. This point is especially pertinent for a team that will do anything to go faster.

If McLaren hopes to collect points in Miami on May 8th, they’ll need to monitor temperatures accurately, iterate quickly, and make effective alterations.

Follow along with us all season as we continue to explore the various strategies and technology that have led McLaren to win 183 races, 12 Drivers’ Championships, and eight Constructors’ Championships.

Learn More About the DataRobot and McLaren Racing Partnership

Diego Oppenheimer is the EVP of MLOps at DataRobot, and previously was co-founder and CEO of Algorithmia, the enterprise MLOps platform, where he helped organizations scale and achieve their full potential through machine learning. After Algorithmia was acquired by DataRobot in July 2021, he has continued his drive for getting ML models into production faster and more cost-effectively with enterprise-grade security and governance. He brings his passion for data from his time at Microsoft where he shipped Microsoft’s most used data analysis products including Excel, Power Pivot, SQL Server, and Power BI. Diego holds a Bachelor’s degree in Information Systems and a Masters degree in Business Intelligence and Data Analytics from Carnegie Mellon University.